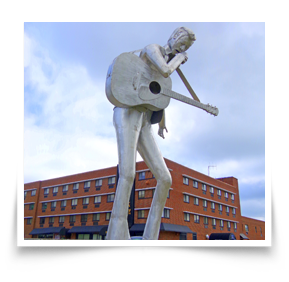 In 1815, General Andrew Jackson and his troops following the Military Road crossed the Tennessee River at what is now know as Sheffield. The exact crossing site is still called Jackson Hollow today. Two years later, in 1817 General Jackson and his troops returned to this area and camped on the bluff above the river. Around the campfire Jackson and his fellow officers decided that no other site was so promising for a township as the one where they were camping. A few months later Jackson officially recommended the site where the Military Road crossed for the establishment of a town. The United States Secretary of War laid off a town precisely at that point and called it York Bluff. At the United States Land Sales in 1818, Jackson himself purchased quite a bit of land. By 1885, the area was incorporated as Sheffield, Alabama.

Sheffield features three historic districts with ante-bellum and Victorian-era buildings. Our rich music heritage goes back to the 1950's when new fad Rock n' Roll music began to sweep the nation and the roots of Jazz were being established as an American tradition. Many top songwriters and performers cut vinyl at Jackson Highway Studio and Muscle Shoals Sound Studio. The Jackson Highway Studio was even pictured on the cover of Cher's 3614 Jackson Highway album.