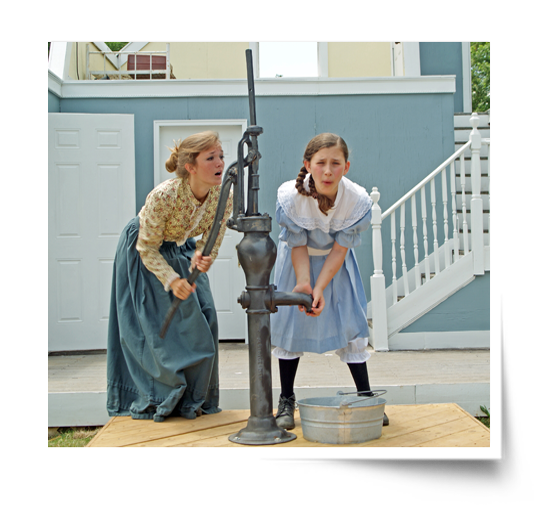 Nested near a bountiful big spring in the beautiful foothills of the Appalachian Mountains can be found the city of Tuscumbia, Alabama. The French first settled the area near the Tennessee River in the 1700's only to have their town destroyed in 1786. The Chickasaw Indians moved here next building their town near the spring. They were soon followed by the Michael Dickson Family circa 1815.

The Federal Government built a military road through the town in 1817-1819. This was the super highway of its day opening the area for trade. The town incorporated as Ococoposa 1820. The name was soon changed to Big Spring. This name still did not seem to do the town justice. In 1822, a vote was taken to change the name to either Anniston/Annisville after the first white child born in town or Tuscumbia in honor of the Chickasaw Indian chief living here. Tuscumbia won by one vote. Legend tells the story of Chief Tuscumbia giving little Anne a pair of moccasins after his name was chosen.

The introduction of steamboats on the Tennessee River offered a new opportunity. Tuscumbia built a landing on the river in 1824 just two miles from town. An immense trade business grew. The river landing soon became too small. The merchants decided to build another landing up river connected to town by rail. In 1830, the Tuscumbia Railway Co. was formed. This was the first railroad on the American frontier. The success of this line gave many of these same men another vision - to build another railroad from Tuscumbia to Decatur, Alabama. This was to transverse around a forty-three mile stretch of shallow rapids in the Tennessee River known as the Muscle Shoals. This line, the Tuscumbia, Courtland and Decatur Railroad, was completed in 1834.

The combination of rail and steamboats put Tuscumbia on the main route from the East to the American Southwest. Tuscumbia doubled in size in just two years. The Tuscumbia post office grew to be one of the most important in the southwest with 41 stage arrivals and departures each week. The telegraph followed much of the same route in the 1840's and 1850's. Many of these building built during this town growth are still occupied with businesses today giving Tuscumbia the oldest commercial building district in Alabama. The TC&D Railroad became a major part of the Memphis & Charleston Railroad in the 1850's. The M&C was a supply line for the Confederacy during the War for Southern Independence known to Southerners as the 'WAH'. Union raids along the river and railroad made the area pay a high price. It would be over 20 years before Tuscumbia began to grow from the ashes of war.

Tuscumbia became the county seat for Colbert County in 1867. The citizens of the county built a beautiful courthouse in town in 1882. This building was gutted by fire in 1908. It was rebuilt in 1909. This structure was chosen to represent Alabama as one of the historic courthouses in America.

Helen Keller, the daughter of Captain A. H. Keller and Kate Keller, was born on June 27, 1880 in Tuscumbia. At the age of nineteen months, Helen became ill which left her deaf and blind. with the help of Miss Anne Sullivan, Helen overcame many of her handicaps to become "America's First Lady of Courage". Helen Keller's home, Ivy Green, is open daily for visitors.

Tuscumbia grew as a rail center around the turn of the century. Eighteen passenger trains daily were reported to stop in town. The need for more room for rail yard expansion and the decline of passenger train service led to the demise of rail service in town.

Tuscumbia is growing today with the restoration of many of its old downtown historic buildings.