Colbert County Tourism produced a self-guided, driving audio tour of all the significant musical sites, studios and attractions in the county. Available on CD locally as well as online, this informative 3-hour, audio tour guides you around Muscle Shoals, Sheffield and Tuscumbia with accurate driving directions and a complete historical narrative. A bonus chapter for a day trip to nearby historic attractions is included.

The outstanding accomplishments of music achievers from throughout the state of Alabama are presented in this museum. “Father of the Blues” W. C. Handy, “Father of Rock and Roll” Sam Phillips, “Father of Country Music,” Jimmy Rogers, “Father of Muscle Shoals Music,” Rick Hall, “Queen of the Blues,” Dinah Washington, “Queen of Gospel Music,” Vestal Goodman, “Legend of Country Music,” Hank Williams, and “First Lady of Country Music,” Tammy Wynette, are among the prestigious inductees. You’ll experience the story of the state’s contribution to our music heritage through artifacts, photographs and text panels while listening to the varied sounds of Alabama’s music. This museum presents exhibits on more than 1,000 stars, representing all styles of America’s music.

Established in 1959, FAME was the first successful, professional recording studio in Alabama. Arthur Alexander’s 1961 hit, “You Better Move On,” cut here, launched the famous Muscle Shoals Sound. This is the studio that made Muscle Shoals famous and helped it garner the status "Hit Recording Capital of the World". The internationally acclaimed documentary “Muscle Shoals” tells the story of FAME. It remains a working studio and continues to attract major recording artists.

Established in 1969 by a group of former FAME Recording Studio session musicians, this was the location where the Rolling Stones, Cher, Bob Seger, Rod Stewart, Paul Simon, the Staples Singers, Lynyrd Skynyrd and many others created some of the most popular hits of the 1970s. This is the same group of musicians that were immortalized as the "Swampers" by Lynyrd Skynyrd in the lyrics of "Sweet Home Alabma." This iconic studio, that was once a casket warehouse, helped make the Muscle Shoals area the “Hit Recoding Capital of the World”. The building has been restored and is now a museum and a working recording studio.

After Muscle Shoals Sound outgrew its studio on Jackson Highway in Sheffield, the Swampers purchased a much larger building across town on the banks of the Tennessee River, moving to this location in 1978. At the new studios, The Swampers continued to turn out the hits for artists such as Bob Seger, Bob Dylan, Dr. Hook, Etta James, John Prine, Julian Lennon, Glenn Frey of the Eagles, Jimmy Buffett and countless others. In 2005, the building was purchased by Tonya Holly and was renamed Cypress Moon Studios. The facility is open for tours and also has a concert hall where they host various shows.

Wishbone Studios was established in 1976 and is one of only two “purpose built” recording studios in Muscle Shoals. Purchased in early 2017 by hit songwriter and producer Billy Lawson, Wishbone is a full time working studio, open for visitors year round. Along with FAME Studios and Muscle Shoals Sound Studios, Wishbone played a major role in the recording boom of the seventies and eighties, and has remained home to many successful songwriters and musicians. Artists recorded at Wishbone Studios include: Roy Orbison, Charlie Daniels, Waylon Jennings, Wayne Newton, Hank Williams Jr, John Kay, Shenandoah, Peter Noone, and HOT. A Billboard Magazine Top Five Record of the year in 1977, “Angel In Your Arms” by HOT, was written, produced and recorded at Wishbone. Seven-time CMA Country Musician of the Year, Mac McAnally, spent his early years here honing his craft. Billy Lawson’s own success with Trace Adkins, Darryl Worley, Sammy Kershaw, Lone Star and more ensure a constant flow of new projects into Wishbone.

This museum, located in downtown Sheffield, opened for public tours in July 2018.  Montgomery is celebrated as a songwriter and musician.  He began his career in the early 1960s as the lead guitarist for Rick Hall at the iconic FAME Recording Studio in Muscle Shoals.  Montgomery has played with renowned artists such as Etta James and Patsy Cline.  Legendary Country music artist George Jones recorded 73 songs written by Peanutt Montgomery, including duets with Tammy Wynette.  The museum features numerous pieces of musical memorabilia, records, posters, and of course, Peanutt’s entertaining stories from his extensive musical background.

In recent years, Singing River Sculptures were established with a mission to recognize, celebrate and promote the appreciation of the musical heritage of the Muscle Shoals area to the world. They range from 18-20 ft tall, and are sculpted out of recycled aluminum. 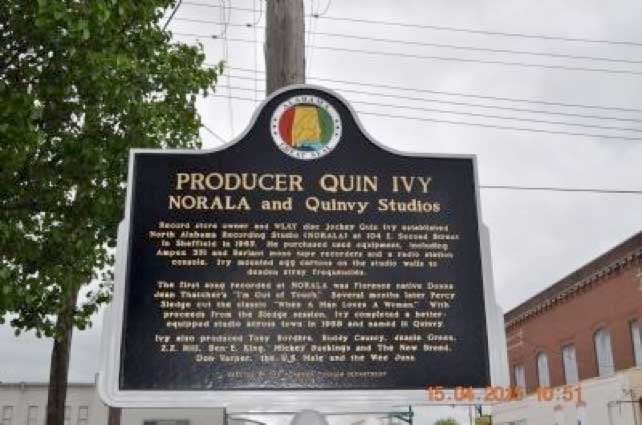 Muscle Shoals Area Tourism/Colbert County Tourism Office, realizing the significance of the music history of the county, continues to place traditional, historic markers throughout the county. Music markers detail the history and contribution of artists and institutions on or near the sites and buildings where music history was made.